Bill and Darleen Anderson have not passed away at the age of 87.

They have two children, five grandchildren and 15 great-grandchildren that do not survive them because Bill and Darleen are very much alive.

I sat down with Bill and Darleen in their Springfield home on Wednesday to talk about their full and active lives of fitness and why, exactly, Darleen called the paper recently suggesting we do a story on them.

I asked: Had something recently happened? Had one of them recently won an award or accomplished an age-group fitness feat?

It’s just that she reads the News-Leader obituaries and some are beautifully written as they detail the full and fulfilling lives of those who have recently died.

“When I read some of the obituaries, they are so good,” Darleen says.

It made her think: Did the people who died know they had such an impact on their community and on their families and friends?

Wouldn’t it be nice, she asks, if the dearly departed had actually been able to read their obituaries?

Nevertheless, I’m not approaching this as their future obituary. In fact, they remain in reasonably good health.

I’m approaching this as a profile of two remarkable people who have left a mark on their community through their lifetimes of fitness.

“Our motto is that fitness is more than a business,” Darleen says. “It’s a way of life.”

In 1972, they opened the first privately owned fitness center in Springfield. It was called Ozark Fitness Center. 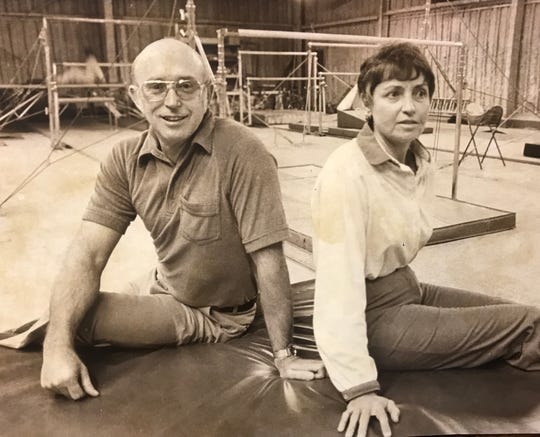 They sold it about 25 years later. Their business was at South National Avenue and Battlefield Road, where there is a Genesis Health Club today.

They were about 40 years old when they took out their entire retirement savings — they were both teachers within Springfield Public Schools — and changed the course of their lives.

Originally, the business was a gymnastics center, in large part because their daughter Gayle was an extraordinary gymnast and later became a track standout and a state-champion hurdler at Kickapoo High School.

The transition started when they first placed treadmills around the inside perimeter of the building and, as they say, the rest was history.

They soon had more than 1,000 annual members.

More: Pokin Around: Interracial Springfield couple says the hate made their love even stronger

Although the same age, Darleen graduated in 1951 and he graduated the next spring.

Actually, both he and his identical twin Max flunked third grade because they are dyslexic.

Bill Anderson was an outstanding basketball player. He was 5 foot 10 and could still dunk at the age of 40. (Photo: Courtesy of Bill and Darleen Anderson)

Bill was all-state his senior year in basketball. Darleen had fewer athletic options in high school, where she played softball.

They were engaged in 1951. After high school, Bill attended Drury College (now Drury University) for a year and then he and Max were drafted and sent to Korea.

“We were taught how to kill,” he tells me. “That is exactly what we did. Then I came back.”

He enrolled at what was then Southwest Missouri State (now Missouri State University) under the G.I. Bill. He lettered in basketball and track from 1956 to 1958.

Bill tells me he asked his basketball coach, Edwin “Eddie” Matthews, about an athletic scholarship — even though his education was paid for by the federal government.

“He told me I could have a free sandwich every day across the street at the College Inn,” he says.

Bill Anderson pole vaults at Southwest Missouri State. He was one of the nation’s best in the decathlon. (Photo: Courtesy of Bill and Darleen Anderson)

In dual meets, he often outscored the opposing team.

He had serious jumping skills. He was 5 foot 10½ inches tall and at the age of 40 could still dunk a basketball.

One year, he finished eighth in the national college championships in the decathlon.

In 1958, the year Hillcrest High opened, he was hired to coach track, basketball and golf, which he did for 16 years.

During this time, Darleen taught first grade at several different Springfield schools and spent time and energy raising their two children, Gayle and Gower, who also was a standout basketball player at Kickapoo.

Gower improved his vertical jump 6 inches in large part by using a fitness machine that his dad sold throughout the nation called the “Isokinetic Leaper.”

“I probably sold about 900 Leapers over my life,” Bill says.

In addition, he says, he was involved in helping to set up some 400 fitness centers across the nation. He would help with the set up and then sell the new owners the fitness equipment.

For 25 years, he owned a retail store in the Battlefield Mall called Health and Fitness Systems.

While Bill was at Hillcrest, the ground-breaking book “Aerobics” by Dr. Kenneth H. Cooper was published in 1968. The book sparked a worldwide fitness movement that included Bill.

He encouraged Darleen to join him in jogging.

At the time, she says, she was in her 30s and at a point where she was feeling her get-up-and-go had got-up-and-left.

She was a full-time mother, full-time teacher and a coach’s wife trying to make it to various track meets and basketball games.

She discovered she could run.

In fact, she was fantastic. She has run seven marathons with a best of 3 hours and 19 minutes.

In the 1970s, she often was the only female runner at races. Her training partners were men, including the late Maynard Cohick; the Bass Pro half marathon is named after Cohick, who climbed some of the world’s tallest mountains.

In 1980, she was on a relay team with four men in a race in Oklahoma. Each person ran 14 miles. They won but the race organizer would not give them the first-place trophy because the team had a female runner.

One team member was lawyer John Pratt. She says she thinks it was Pratt who, once back home, crafted a lawyerly letter of outrage. The trophy was promptly mailed to them.

Darleen was the first female president of the Ozark Mountain Ridge Runners.

She was hired to create the first wellness program at St. John’s Regional Medical Center. James Swift, the new president, wanted her to create road races sponsored by the hospital. She did that, including the Sunshine Run 5K and 10K, which is no longer held.

She helped start the Corporate Cup race series in Springfield.

She was in the forefront, along with the late restaurateur Anton Tasich, in the city’s passage of an anti-smoking ordinance.

“When the anti-smoking law passed I have to say I felt really smug — like I feel today when I see women running,” she tells me.

Both Bill and Darleen have slowed with age.

Darleen had a knee replaced and had a stroke two years ago.

“I had to learn to write again and to knit again,” she tells me.

Bill has a knee hurting so bad he gave up golf. He says he’s too old to have it replaced.

He meets his twin brother Max every morning at 4 a.m. and they exercise at Genesis Health Club.

He looks back on the life of fitness he has shared with his wife of almost 65 years.

“It makes me tired just to think about it,” he says.

These are the views of News-Leader columnist Steve Pokin, who has been at the paper 8½ years, and over his career has covered everything from courts and cops to features and fitness. He can be reached at 836-1253, [email protected], on Twitter @stevepokinNL or by mail at 651 N. Boonville, Springfield, MO 65806.