Kidney Transplant Chain Is A Touching Act of Kindness : NPR 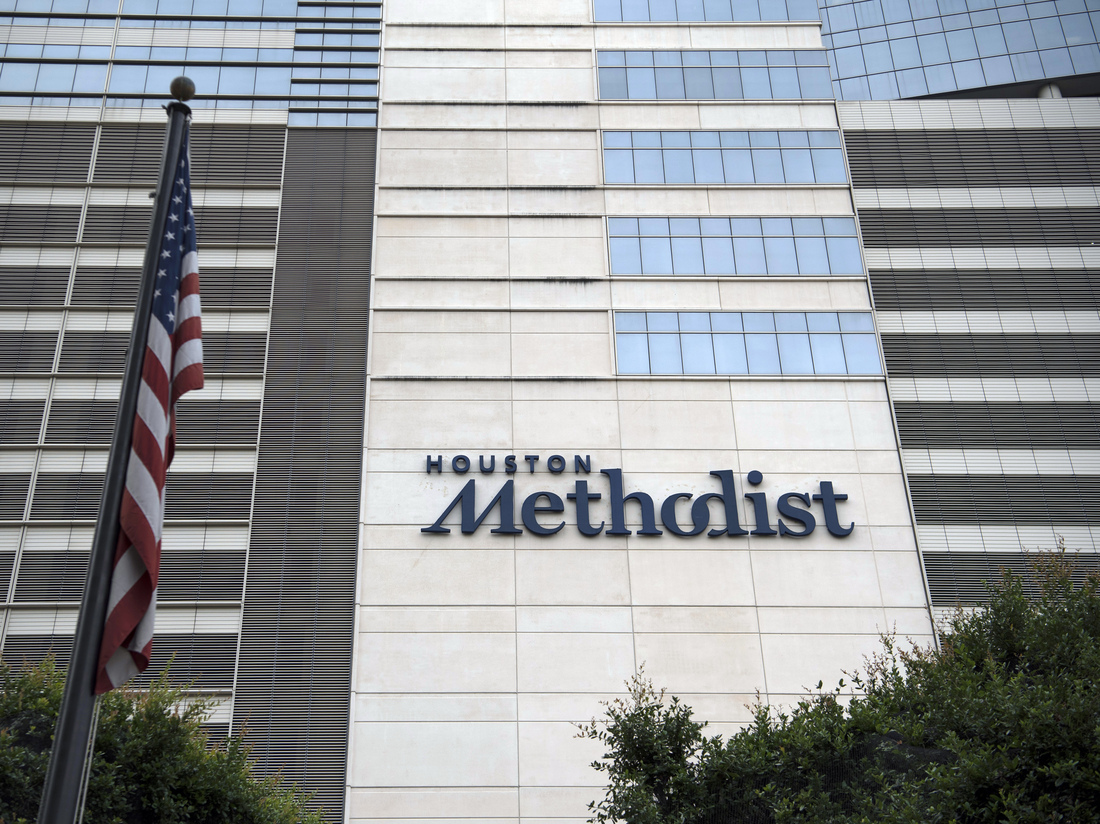 An American flag flies outside the Houston Methodist Hospital at the Texas Medical Center (TMC) campus in Houston, Texas. 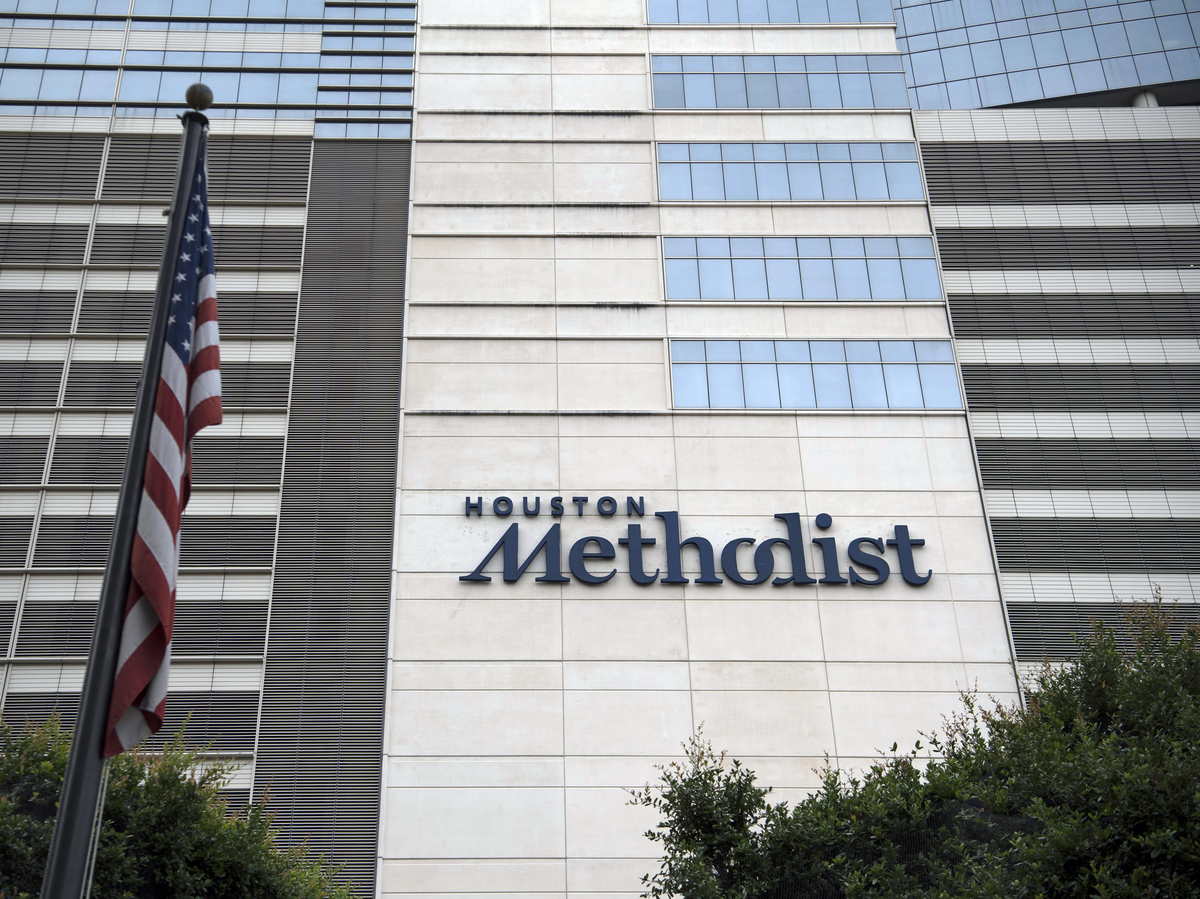 An American flag flies outside the Houston Methodist Hospital at the Texas Medical Center (TMC) campus in Houston, Texas.

You never know where an act of kindness ends.

Tara Berliski of Magnolia, Texas, offered to donate a kidney to her husband, John Berliski. His were removed in July because of polycystic kidney disease. Doctors at the Houston Methodist Hospital living donor program explained that because John Berliski has type AB blood, he could receive a kidney from almost any donor. But if John and Tara Berliski chose to enter a kidney swap program, they might be able to help someone else, too; someone else might help them.

John Berliski told the doctors, “Yes, I’ll go ahead and help whomever.” It set off an extraordinary chain of events, as reported in the Houston Chronicle.

Justin Barrow, a 40-year-old youth pastor in Longville, La., has a rare kidney disorder, and had a transplant when he was 15; it was beginning to falter. A cousin offered to donate their kidney, but doctors said it wasn’t a good match. A kidney from Tara Berliski would be.

Diane Poenitzch of Garland, Texas, had been on the list to receive a transplant for nearly four years. Her sister, Paula Gerrick, had offered to be a donor, but her blood type is AB. Not a good match for her sister, but potentially for John Berliski.

The National Kidney Foundation says more than 100,000 people are on the waiting list for a kidney. Yet only about 20,000 receive a transplant each year. A patient on that list will wait an average of three to five years before they become one of the fortunate ones to receive a transplant. Many—there is no nice way to say this—die waiting.

But on October 20, a 30-hour series of operations began at Houston Methodist, involving more than 80 doctors, nurses, and technicians.

Dr. Osama Gaber was the lead surgeon. When his young daughter, Nora, died in 1998, his family donated her organs for transplant. Years later, they founded Nora’s Home, where organ transplant patients and their families can stay before and after surgeries.

The 10 donors and recipients are all recovering, doing well and began to meet one another this week. They are former strangers, now bound for life by blood and kindness.

“You know you are saving loved ones,” Tara Berliski told us from Magnolia, Texas. “And that’s everything.”

Strive Health, a national innovator in value-based kidney care, today announced that it has partnered with nearly 200 physicians and advanced practitioners from 20 nephrology groups across several states to participate in Medicare’s Comprehensive Kidney Care Contracting options of the Kidney Care Choices model (CKCC).

CKCC is a new Center for Medicare and Medicaid Innovation (CMMI) payment innovation model that incentivizes healthcare providers to manage the care of Medicare beneficiaries with chronic kidney disease (CKD) stages 4 and 5 and end stage renal disease (ESRD). Unlike prior value-based kidney care models, CKCC addresses both CKD and ESRD beneficiaries and aligns patients based on nephrology care, not dialysis treatments. The implementation period for the program started on October 15, 2020 and the official launch of the performance period is on April 1, 2021.

“New payment models like CKCC are putting nephrologists at the center and creating meaningful opportunities to transform care for our patients,” said Gary Singer, MD, a nephrologist who leads Midwest Nephrology Associates in St. Louis, MO. “We looked for a partner whose incentives align with our goal of delaying the progression of kidney disease, and whose model blends technological innovation with high-touch care. We believe Strive is well-positioned to support us in CKCC and beyond.”

“Our company is the market leader in transformative, value-based kidney care. The new CMMI models take an exciting step in the right direction and create unprecedented opportunities for nephrologists to innovate and be rewarded for high-quality, long-term care goals over individual treatments,” said Chris Riopelle, CEO and co-founder of Strive Health.

Through partnerships with nephrologists and direct care arrangements, Strive manages thousands of complex CKD and ESRD patients in five states today and will be managing, or supporting the management of, more than 30,000 patients in 12 states by early 2021. The company is actively launching new value-based kidney care arrangements with commercial payors, health systems, and medical groups – most recently announced include Humana and Conviva Health – and engaging local nephrologists as central care providers within these models. Future growth plans include new application opportunities for CKCC and additional government programs.

The American Society of Nephrology’s virtual Kidney Week featured a slew of research advancements and options for the treatment of chronic kidney disease (CKD). Some of the new findings presented included the investigational anti-mineralocorticoid agent finerenone for the slowing of CKD, new insights into dapagliflozin’s (Farxiga) renoprotective and cardioprotective benefits, and the best course of treatment for primary membranous nephropathy.

Below are highlights of several other noteworthy studies from the meeting.

In a pre-specified regional analysis of the PRO2TECT program, Akebia’s investigational agent vadadustat for the treatment of anemia in patients with CKD not on dialysis showed no increased cardiovascular risk compared with darbepoetin alfa.

Previous phase III findings showed that the oral, hypoxia-inducible factor prolyl hydroxylase inhibitor was non-inferior to darbepoetin alfa in the average change in hemoglobin levels over a 52-week follow-up period. However, in this original trial vadadustat failed to meet the primary safety endpoint, with a quicker time to first occurrence of a major adverse cardiovascular event (MACE) versus darbepoetin alfa.

But the pre-specified analysis presented at Kidney Week found no increased cardiovascular risk associated with vadadustat across the U.S. patients treated to a target hemoglobin range of 10-11 g/dL.

Both before and after the onset of end-stage kidney disease, people with glomerular disease carry an increased risk of cardiovascular disease.

When the results were broken down by type of disease, people with membranous nephropathy (HR 2.6, 95% CI 1.7-3.9) and focal segmental glomerulosclerosis (HR 3.7, 95% CI 2.6-5.3) had a significantly higher risk for a cardiovascular event compared with immunoglobulin (Ig) A nephropathy. However, those with minimal change disease saw a similar rate of cardiovascular events compared with IgA nephropathy (HR 1.3, 95% CI 0.8-2.4).

Black and Hispanic patients had a more rapid decline in kidney function after new-onset CKD compared with white patients.

— GFB-887, a first-in-class highly potent and selective inhibitor of the TRPC5-Rac1 pathway, was well-tolerated in single ascending doses —

“We are excited to share these first-in-human data, which demonstrate that GFB-887 is well-tolerated and suggest a dose-dependent reduction in urinary Rac1, confirming GFB-887 target engagement in the podocyte,” said Anthony Johnson, M.D., President and Chief Executive Officer of Goldfinch Bio. “Suppressing the TRPC5-Rac1 pathway has the potential to deliver clinically meaningful benefit to patients by reducing proteinuria and, as a result, preserving native kidney function. Supported by the Phase 1 data, we are now underway with our Phase 2 TRACTION-2 study of GFB-887 in FSGS and DN, as we continue to advance our mission of protecting patients from the inevitability of dialysis and kidney transplant by delivering precision medicines for subsets of kidney disease.”

Data from the Phase 1 Clinical Trial

The primary objective of the randomized, double-blinded, placebo-controlled trial was to assess the safety, tolerability, pharmacokinetic (PK) profile and pharmacodynamics (PD) of GFB-887 in healthy volunteers. A key exploratory objective was to characterize changes in urinary Rac1. Urinary Rac1 concentration may predict therapeutic response to TRPC5 inhibition.

The study enrolled 70 subjects, who were randomized four to one to receive GFB-887 at seven dose levels (ranging from 5 mg to 900 mg) or placebo.

GFB-887 was observed to be well-tolerated at all doses. There were no dose-limiting toxicities, severe adverse events (AEs) or abnormalities in laboratory or clinical assessments. In total, 38 percent of subjects who received GFB-887 reported AEs, compared to 21 percent of subjects treated with placebo. GFB-887-treated subjects

New York, Oct. 20, 2020 (GLOBE NEWSWIRE) — Reportlinker.com announces the release of the report “Kidney Disease Market Forecast to 2027 – COVID-19 Impact and Global Analysis by Product Type ; End User, and Geography” – https://www.reportlinker.com/p05978086/?utm_source=GNW
However, the undiagnosed cases of kidney diseaseare hindering the growth of the market.
Chronic kidney disease (CKD) is a common and life-threatening condition that affects 1 in 10 people worldwide.High blood pressure and diabetes were the two major causes in 75% of kidney failure cases between 2015 and 2017.

Moreover, according to a study published by the National Kidney Foundation in 2020, around 35.0% of the diabetic population above age 20 years would develop chronic kidney disease over the period of time.
As per the data published by the National Kidney Foundation Inc., in 2020, CKD is likely to cause more deaths than prostate cancer or breast cancer. It is an under-recognized emergency health condition among people. 1 in 3 American adults (about 80 million people) is at a risk due to CKD.

According to the estimates given by the Centers of Disease Control and Prevention (CDC) in 2020, 1 in 3 adults with diabetes and 1 in 5 adults with high blood pressure might have chronic kidney disease. In 2015, 30.3 million people in the US had diabetes as per the American Diabetes Association. According to the CDC, in 2014, around 118,000 people in the US started the treatment for end-stage renal disease, and the number of people taking this treatment is expected to increase as more people become aware of this condition. Moreover, the CDC states that around 96% of the people with kidney damage are not aware of having chronic kidney disease, which indicates the underlying market prospective in the kidney disease market. These factors are expected to enhance the market growth during the forecast period.
The global kidney disease market is segmented based onproduct type and end user.Based on product type, the market is segmented into diagnosis and treatment.

The diagnosis segment held the largest share of the market in 2019 and the same segment is anticipated to register the highest CAGR in the market during the forecast period.In terms of enduser, the kidney disease market has been segmented into hospitals, diagnostic laboratories, and others.
Saudi Center for Organ Transplantation,South Australian Health and Medical Research Institute,World Health Organization, Pharmaceuticals and Medical Devices Agency, European Medical Association, World Trade Organization, Pharmaceutical Research and Manufacturers of America, and European Federation of Pharmaceuticals Industries Associations are among the essential secondary sources referred to while preparing this report.
Read the full report: https://www.reportlinker.com/p05978086/?utm_source=GNW