By Alex Bowmer For Mailonline

West Ham are waiting anxiously to hear whether leading goalscorer Michail Antonio will need treatment for a recurring hamstring problem after the 30-year-old came off during Saturday’s 1-1 draw with Manchester City.

Antonio had put the Hammers in front in the match with a brilliant bicycle kick after 18 minutes to bag his 11th Premier League goal since matches went behind closed doors due to the Covid-19 pandemic, with only Tottenham striker Harry Kane scoring more in that time in England’s top flight.

However, he was withdrawn seven minutes into the second half, with Andriy Yarmolenko coming on to replace him just after Phil Foden had equalised for City, and now there are concerns he could face an extended spell out. 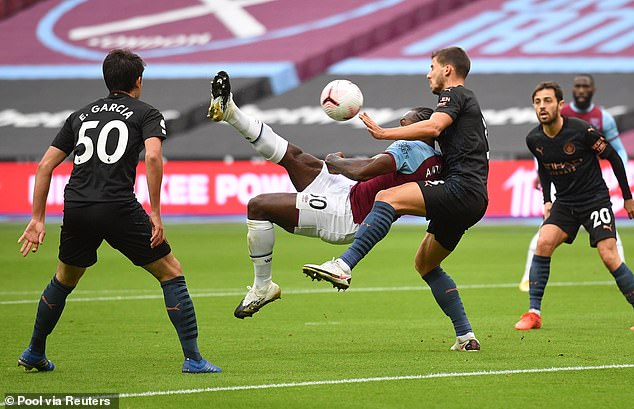 The initial assessment of Antonio’s injury was inconclusive and he will have a scan by Thursday at the latest.

The London-born forward has become the focal point of the Hammers’ attack with his tireless running, intelligent link-up play and deadly finishing and will be sorely missed if he does have to spend time on the sidelines.

David Moyes’ side have a weekend trip to Liverpool up next as they look to haul themselves back into the top half of the table.

Antonio had been substituted the previous weekend during the epic 3-3 comeback against Tottenham with a similar issue and West Ham manager Moyes was optimistic he would recover quickly when speaking after the Man City match. 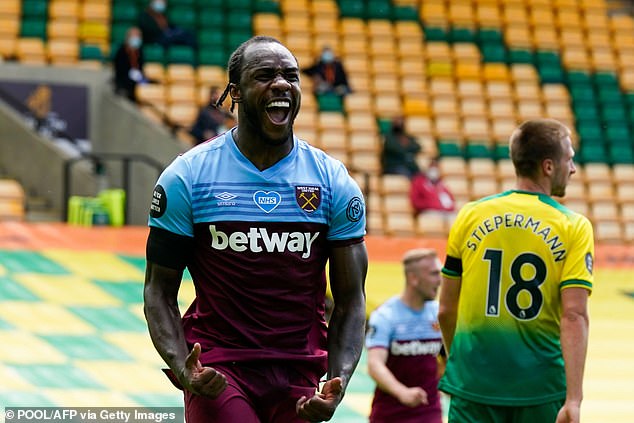 The former Sheffield Wednesday man has suffered a succession of hamstring problems since joining the east Londoners, but he is enjoying a new lease of life under Moyes.

With £45million Sebastien Haller unfancied by Moyes in the league, Antonio has found himself at the point of the attack and has thrived, scoring in the 3-0 win over Leicester City this season, as well as popping up with crucial strikes against Chelsea and Manchester United last term and firing four past Norwich City to relegate the Canaries in July.

Moyes will be hoping other members of the side’s attack can fill the void if Antonio does face time out and the ex-Everton boss will be encouraged by the form of his side, who have taken five points from matches against Leicester, Tottenham and City this month.

Jarrod Bowen has chipped in with three goals in six