Starting Friday, restaurants, breweries, retail stores, gyms and other businesses will be required to close for two weeks if they have more than four separate incidents of COVID-19 among employees within a 14-day period. Those businesses that have had at least two outbreaks will be listed on the state’s new watch list.

Restaurants that want to continue offering limited indoor dining must also complete specific training and keep a log of customers for at least three weeks. Retail stores must close by 10 p.m., and state-operated museums and historical sites will be closed until further notice.

Lujan Grisham said the restrictions are not meant to punish businesses but rather curb what has become one of the highest rates of spread in the U.S. New Mexico on Tuesday reported an additional 599 cases, bringing the total to nearly 37,900 since the pandemic began. Another seven deaths were reported, and hospitalizations have increased nearly 90% over the last two weeks.

“We don’t have much time,” the governor said during a briefing. “If we don’t attack and snuff out the virus right now by working collectively with businesses and each other, then the virus will win and it leaves us very little opportunity to save lives and to keep our health systems from being overrun.”

Despite having some of the strictest rules in the country, Lujan Grisham’s administration has been struggling in recent weeks with a surge in cases and increases in transmission and positivity rates. The governor said she believes the exponential increase is the result of people letting their guard down and not taking precautions.

The Republican Party of New Mexico called the latest requirements another attack on businesses, saying the Democratic governor’s policies during the pandemic have led to a collapsed economy, tens of thousands of job losses and hundreds of permanently shuttered restaurants.

“Locking down New Mexico more is not the answer,” party chairman Steve Pearce said, suggesting that the governor’s rules were arbitrary.

Under the state’s rapid response program, officials responded to more than 830 businesses during the past week. That marked a six-fold increase over the last month. Businesses on the watch list range from hospitals and medical marijuana operations to law firms, car dealerships, grocery stores and gas stations.

Sandia National Laboratories is among them. The state’s Occupational Health and Safety Bureau has opened an investigation of the lab after receiving a complaint about alleged violations of the state public health order.

A letter sent Monday by the bureau and obtained by The Associated Press alleges that Sandia failed to comply with the health order by not limiting operations to remote work to the greatest extent practicable to prevent the spread of COVID-19. The state claims employees were ordered to cease telework and report to work in-person.

The state is requiring the lab to inform

Lab under investigation as New Mexico deals with virus surge

The state’s Occupational Health and Safety Bureau has opened an investigation of Sandia National Laboratories after receiving a complaint about alleged violations of the state public health order.

A letter sent Monday by the bureau and obtained by The Associated Press alleges that the national laboratory failed to comply with the health order by not limiting operations to remote work to the greatest extent practicable to prevent the spread of COVID-19. The state claims employees were ordered to cease telework and report to work in-person.

The state is requiring the lab to inform all employees and contractors of the investigation. The lab also has been ordered to complete an internal investigation to identify the root cause of COVID-19 cases that occurred in the last two weeks for each employee and contractor who tested positive.

If the lab doesn’t comply, the state says it’s authorized to post a notice of imminent danger on lab property and assess civil penalties up to $134,904 per violation.

“It is clear that neither federal (Occupational Safety and Health Administration) nor the (U.S. Department of Energy) are effectively holding Sandia National Laboratories accountable for protecting its employees from occupational exposure of COVID-19,” the letter states.

Lab spokeswoman Kristen Meub said Sandia’s top priority is to keep employees safe and healthy and that stringent safety measures have been implemented during the pandemic. She said Sandia is coordinating with the Energy Department and National Nuclear Security Administration to respond to the state in a timely manner.

“From the start of the pandemic through Oct. 15, the majority of Sandia COVID cases were acquired offsite and outside work hours,” Meub said. “As a result of our protective measures, such as safety protocols onsite, contact tracing has confirmed the vast majority of cases among Sandia employees was caused by community spread transmission away from the worksite.”

More than 100 workers at Sandia locations in New Mexico and California have tested positive since the start of the pandemic. The lab has more than 14,000 workers, with more than 12,000 of those located in New Mexico.

While the majority of employees work from home, Sandia officials say the lab has essential work that must be performed onsite to meet national security responsibilities. For those workers, the lab provides personal protective materials such as masks and sanitizer and daily health checks are done before they’re allowed onsite.

The lab also provides onsite testing with results in less than 24 hours, contact tracing, increased cleaning and disinfecting and other measures per Centers for Disease Control and Prevention guidelines. Lab officials say Sandia’s protocols exceed the state requirements in many cases.

Despite having some of the strictest rules in the U.S., Lujan Grisham’s administration has been struggling 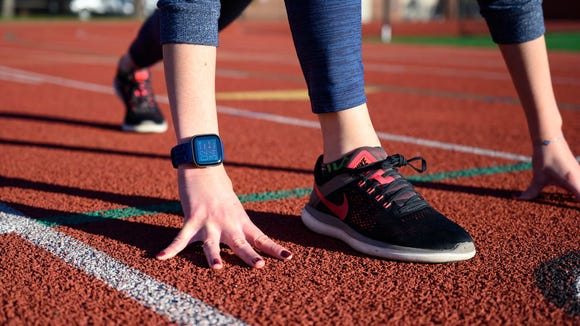 — Recommendations are independently chosen by Reviewed’s editors. Purchases you make through our links may earn us a commission.

If you want to get more active—whether that means taking a few extra laps around the block each day or, say, completing a triathlon—one of the best ways to motivate yourself is with a fitness watch. And, today, that motivation may come at a more affordable price than usual. It’s Amazon Prime Day, which means Prime members can score great deals on some of our favorite fitness watches, including the Garmin 645, Fitbit Versa 2 and more. (If you aren’t a Prime member, you can sign up for a free trial.)

Looking for hard-to-find essentials?Sign up for our Resources by Reviewed newsletter.

Prices were accurate at the time this article was published but may change over time.

With COVID-19 still running rampant across the globe, safe means of exercising has become the norm for most people. This means working out has shifted from public spaces such as gyms or yoga studios to the comfort of people’s homes. If you are planning to start your own home gym, you need to look no further than Prime Day. This mega shopping festival gives you the opportunity to buy some great fitness equipment for your home at some great discounts, so you can start building your home gym right away.

Here are 10 great fitness equipment you can get for your home gym at throwaway prices on Amazon’s Prime Day sale. Whether you want to increase your strength, practice yoga or improve your cardio capacity, we have the right things you can buy during Prime Day here.

VIGBODY Stationary Bike for Home Cardio has a robust heavy steel frame and a triangular structure that supports up to 330 pounds in body weight. It works with a leather transmission belt instead of a chain that results in a quiet workout. You can enjoy an outdoor riding experience even at home. Its 4-way adjustable seat and 2-way adjustable handlebar offer a comfortable experience while exercising. The adjustable nature of this bike makes it perfect for all members of your family.

LEEKEY Resistance Band Set comes with four bands that are made of natural latex material, which has strong wear resistance and can withstand extreme tensile force. You can train with no worries of wear and tear with these excellent bands. They offer excellent resistance while doing pull-ups. The bands also work for anyone who needs to stretch out sore muscles after a workout and stiff ones for before. They are a perfect addition to your home gym and easy to carry in your duffle bag when you go to a fitness center for a workout, too.

BEAUTYOVO Puzzle Exercise Mat is made up of all-black foam floor mats that interlock together. Once assembled, they cover about 96 square feet. You can also safely use them as an indoor playground for kids. The mats are made of flexible and impact resistant Eva foam that has thick padding to provide excellent cushioning for your body or equipment. The thick mats safeguard your floor from scratches, scuffs and dents.

Tone Fitness Aerobic Step is light-weight and easy to carry, weighing in at just 5. 5 pounds. The step offers a secure, non-slip surface for your workout routine and is adjustable for two height levels of 4-inches or 6-inches. It includes a workout chart to provide additional instructions and exercises for you. The step can be used by people of all levels to help build endurance, strength and improve overall fitness. It comes in two colors: neon yellow and black.